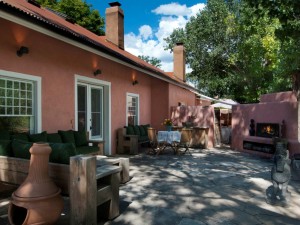 Set in the lush upper canyon of the Santa Fe River, Domicilio Cerro Gordo is one of the oldest farm houses in this historic area that was exclusively devoted to farming as late as just after the first World War. Cerro Gordo, translated as “fat hill,” was part of the Lucero Land Grant in 1732 and the property stayed within familial ownerships of the Lucero, Armijo, and Gonzales families until 1959.

In 1995 Ron Mann, a California designer, and his wife became the current owners and remodeled the home.  It was celebrated in the July, 2002 issue of Architectural Digest.  Special touches include pine flooring from an 18th century New England barn used in the kitchen, sala, and dining room, and use of a felled white fir from the property to create the interior doors, kitchen counters, and shelving.  The white fir stump remains as a natural wood sculpture in the yard.

With three bedrooms and three baths, this south-facing double adobe includes a solar tracking system, raised-bed organic vegetable and flower gardens with an irrigation system, and views of Atalaya and Picacho Peaks.