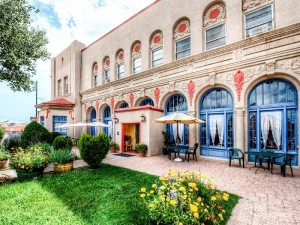 Built in 1923 on the Plaza of downtown Las Vegas, the first significantly sized settlement on the Santa Fe Trail trade route, stands El Fidel Hotel, located on the site of previous incarnations of hospitality establishments dating back to the 1880s.  Placed on the New Mexico State Register of Cultural Properties in 1976 and on the National Register of Historic Places in 1983, El Fidel remains a grand example of Spanish Colonial Revival style.

Replete with the history one would expect of a hotel dating back to the iconic “Wild West” days of the American Frontier, including a shoot-out in the lobby between a judge and a newspaper editor in 1925, the property has been well maintained in keeping with its architectural legacy.