Radio Show on Santa Fe’s Talk 1260 AM KTRC and 103.7-FM
The September 16, 2018 Show (12 – 2 pm)
This weekly radio show features host and Sotheby’s International Realty‘s Associate Broker Rey Post (NM REC License #45660) and a variety of special guests offering the best news, information and commentary regarding every aspect of today’s real estate market.
In the first hour of the show, join Rey and guest co-host Scott Robinson—Branch Manager of theGateway Mortgage Group—as they mark a special anniversary and how it applies to the practice of real estate.
September 16 marks the 236th anniversary (1782) of the first use of the Great Seal of the United States of America. The Great Seal is the official emblem and heraldic device of the United States of America, adopted by our Continental Congress to represent our nation. The Great Seal was intended to demonstrate to the world the ideas and values of our Founders and people, including love of freedom, virtue, honesty, courage, and sacrifice.

In the spirit of this historic occasion, the theme for the first hour of the show is: real estate professionals recognize that the ideas and values represented by the Great Seal, contribute greatly to why people pursue the American Dream of home ownership. 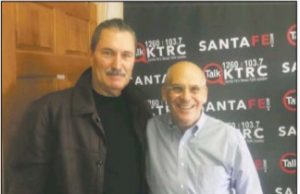 In the second hour of the show, join Rey for a very special interview with the Mayor of Santa Fe, Alan Webber. Becoming the 43rd mayor of Santa Fe—winning with a landslide victory on March 6—Alan is known as a successful entrepreneur and author and has considerable experience in local, state and Federal government activities. Alan worked as the Editorial Director of the Harvard Business Review; ran for the Democratic nomination for Governor of New Mexico in 2014 (finishing second in a field of five candidates); and in 1995, co-founded the technology business magazine, Fast Company, where he was named Adweek‘s Editor of the Year in 1999. Alan happily acknowledges his fortunate place—joining many others in Santa Fe—as a proud father and husband.
In the third of a series of quarterly interviews in 2018 on “All Things Real Estate,” Rey will engage Alan this Sunday in a discussion of a variety of issues, including:
—Impressions of the future of the city, eight months after becoming mayor.
—The expectations of residents with their local government.
—Success with stated goals since becoming mayor.
—Special rewards and unexpected challenges encountered while serving the city.
—Thoughts on the city’s youth as they become community leaders and future home buyers.
—Importance of real estate to the economy of Santa Fe, as well as the housing needs of all residents.
—Santa Fe’s role with our nation and world.
As always, listener email questions and comments are welcome during the broadcast. Join in the conversation by calling Rey with your own questions or comments at 505-989-8900 or you can email Rey at: rpost@atreradio.com.
Check out the radio show and tune in via the Internet: Go to www.ATREradio.com and click on the “Listen Now” button.