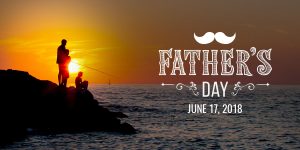 On this Father’s Day, I discovered some useful advice from reading an article that is good when applying to my real estate work, or for that matter, just about any other thing in my life. Written by J. Jennings Moss, the Editor-in-Chief and General Manager of Silicon Valley Business Journal, the article addresses the simple theme of “What I learned when I finally listened to my dad.”

My dad was the king of the backup plan. When I learned to wait tables and then to bartend as a way to work my way through school, he applauded.

“Those are skills that you’ll keep forever, “ Jack Moss would say. “This way, if you get laid off or worse, you’ve got another way to earn a living.”

As I got older and started to pursue a career in journalism — something my parents liked only slightly better than my original plan, which was to be an actor — my dad’s backup instincts kicked in again. I wanted to be a national political journalist. Or a globetrotting foreign correspondent. Or a Pulitzer Prize-winning muckraker. (Of those, I accomplished the first, and still dream about the other two.)

Those were all noble goals, he would say as he would encourage me to think elsewhere: “You should consider being a business journalist. The world will also need people to explain how business works, how products succeed or services fail. Good business coverage has a deeper impact than you know,” he said

My dad knew a little something about survival, business and luck. The youngest of six kids born to Eastern European immigrants just before the start of the Great Depression, he grew up in Brooklyn — Coney Island, to be exact — watching his father, a peddler, push a cart through crowded neighborhoods selling this, that and the other.

I never heard my dad describe his life as poor or sad or unfortunate. The only sentiment he expressed was a desire to leave home, which he did when he joined the Army in World War II. When the war ended, he used the G.I. Bill to get a bachelor’s degree in hotel management and then a master’s in international relations.

From there, my dad’s life changed forever. He went to work for Northwest Orient Airlines, moved to Tokyo, lived the life of a carefree bachelor expat, met my mom and had three sons. After more a decade in Japan, he moved the family to Hong Kong, where we spent eight years. That was a great time in his life: full of exotic adventures, a successful career in a glamorous industry, plenty of friends and a loving family.

But his circumstances started to change when we returned to the states in 1972. He found himself managing a Mexican restaurant on Moorpark Avenue in San Jose, until an old boss got him back into the airline business, working for the now-defunct World Airways at Oakland International Airport. He made that San Jose-Oakland commute every day in a lemon-yellow Ford Pinto.

Six years later, another change in employers moved us to Tucson and he went to work for Evergreen International Airlines. He only lasted there a year, and at the age of 55, he realized he’d aged out of most jobs.

Jack tried to become a small business owner, twice, but failed. He sold computers at Radio Shack, and though he didn’t love it, he showed up every day and did the best he could. I never heard a defeatist word come out of his mouth and didn’t fully comprehend how bad his finances were until I saw one of his tax returns several years later.

He finally retired at age 65 after my mother died from cancer. He would live another 18 years, delicately managing his investments and providing me career advice.

It wasn’t until his death in 2006 that I finally did what he had suggested years before and became a business journalist. And I finally understood what he was trying to tell me: tell a business story and you’ll tell a tale about life and loss, about success and failure, about humility and hubris.

Thanks, dad, for guiding me to my backup plan.

So “Rey’s Real Estate Recommendation” for this week, is to reflect on this Father’s Day how dad’s experiences and observations can, more often than not, bring great value to your own career pursuits and the way you lead your own life.